Consciousness: state of awareness of self and environment
Alertness: An alert patient is fully conscious and aware of their environment
Confusion: inability to think with customary speed, clarity, and coherence.
Lethargy: difficult to maintain the arousal state
Obtundation: responsive to stimulation other than pain
Stupor: responsive only to pain
Coma: the patient is unconscious, unaware, and unresponsive to external stimuli
Delirium: clouding of consciousness with reduced ability to sustain attention to environmental stimuli.
Encephalopathy: a broad term used to denominate a syndrome of diffuse cerebral dysfunction
Some of the above terms are not rigidly defined and it is useful to record both stimulus and response

Maintaining alertness is primarily a function of the ascending reticular activating system (ARAS), which projects from the brainstem tegmentum through synaptic relays in the rostral intralaminar and thalamic nuclei to the cerebral cortex
Awareness is primarily a function of the cortex, with contributions from the precuneus and anterior cingulate gyrus Coma, overall approach to the patient

Several different states of impaired cognition or consciousness may appear similar to coma or be confused with it
Differentiation of these states from true coma is important to allow administration of appropriate therapy and help determine prognosis. Then the patient should be classified into one of the following groups:
1. Coma with FNDs
2. Coma with meningismus
3. Coma without FND or meningismus 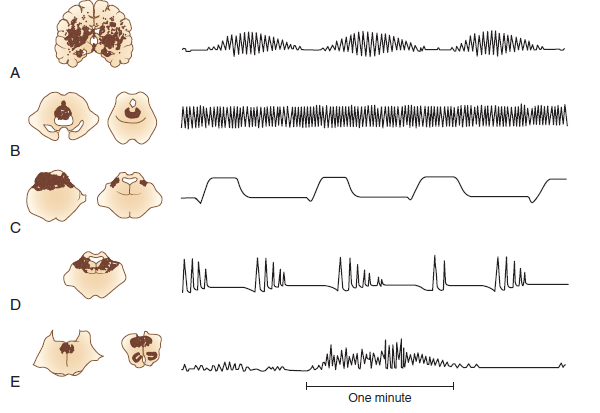 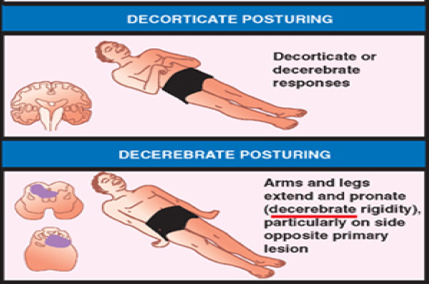 1. The time course: structural lesions have a more abrupt onset, whereas metabolic or toxic causes are more slowly progressive
2. Multifocal structural diseases such as vasculitis or leukoencephalopathy are an exception to this rule, as they may exhibit slow progression
3. Response to initial emergency therapy
4. Structural lesions have focal features or at least notable asymmetry on neurological examination. Toxic, metabolic, and psychiatric diseases are characterized by their symmetry
5. Any toxic-metabolic cause of coma may be associated with focal features; however, such features most often are observed with barbiturate or lead poisoning, hypoglycemia, hepatic encephalopathy, and hyponatremia. Old structural lesions with residual abnormalities and unmasking of subclinical underlying disease may be the cause of focal signs
6. Structural lesions that may mimic toxic-metabolic causes include: SAH, CVT, chronic or bilateral subdural hemorrhage, and other diffuse or multifocal disorders such as vasculitis, demyelinating diseases, or meningitis
7. State of consciousness. Patients with metabolic problems often have milder alterations in arousal, typically with waxing and waning of the behavioral state. Patients with acute structural lesions tend to stay at the same level of arousal or progressively deteriorate. Toxins may also cause progressive decline in level of arousal.
8. Respiration. Deep, frequent respiration most commonly is due to metabolic abnormalities, though rarely it is caused by pontine lesions or by neurogenic pulmonary edema secondary to acute structural lesions.
9. Funduscopic examination. Subhyaloid hemorrhage or papilledema are almost pathognomonic of structural lesions. Papilledema due to increased ICP may be indicative of an intracranial mass lesion or hypertensive encephalopathy. Papilledema does not occur in metabolic diseases except hypoparathyroidism, lead intoxication, and malignant hypertension.
10. Pupil size. The pupils usually are symmetrical in coma from toxic-metabolic causes. Patients with metabolic or toxic encephalopathies often have small pupils with preserved reactivity.
11. Exceptions occur with methyl alcohol poisoning, which may produce dilated and unreactive pupils, or late in the course of toxic or metabolic coma if hypoxia or other permanent brain damage has occurred
12. Pupil reactivity. Assessment of the pupillary reflex is one of the most useful means of differentiating metabolic from structural causes of coma. Pupillary reactivity is relatively resistant to metabolic insult and usually is spared in coma from drug intoxication or metabolic causes, even when other brainstem reflexes are absent. Hypothermia may fix pupils, as does severe barbiturate intoxication. Neuromuscular blocking agents produce midposition or small pupils, and glutethimide and atropine dilate them.
13. Ocular motility. Asymmetry in oculomotor function typically is a feature of structural lesions
14. Spontaneous eye movements. Roving eye movements with full excursion are most often indicative of metabolic or toxic abnormalities
15. Reflex eye movements. Reflex eye movements normally are intact in toxic-metabolic coma, except rarely in phenobarbital or phenytoin intoxication or deep metabolic coma from other causes.
16. Adventitious movement. Periods of motor restlessness, tremors, or spasm punctuating coma often are due to drugs or toxins such as chlorpromazine or lithium. Brainstem herniation or intermittent CNS ischemia also may produce unusual posturing movements. Myoclonic jerking generally is metabolic and often anoxic in origin
17. Muscle tone. Muscle tone usually is symmetrical and normal or decreased in metabolic coma. Structural lesions cause asymmetrical muscle tone. Tone may be increased, normal, or decreased by structural lesions 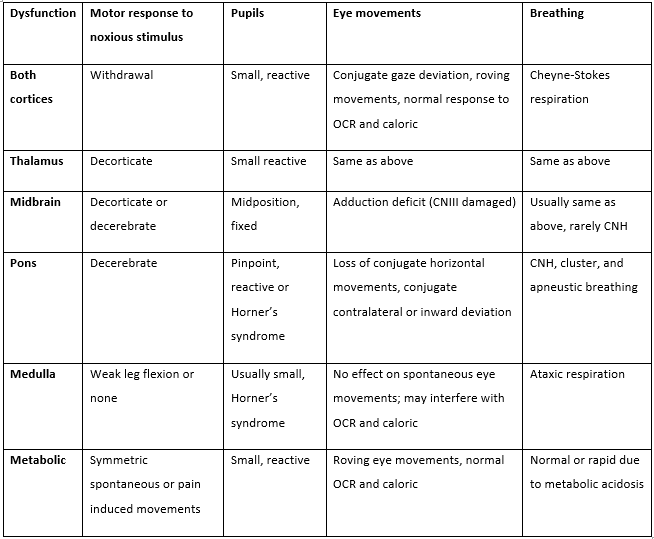 1. Increased ICP is always present.
2. A history of headache before the onset of coma, vomiting, severe hypertension beyond the patient’s static level, unexplained bradycardia, and subhyaloid retinal hemorrhages (Terson syndrome) are immediate clues to the presence of increased intracranial pressure, usually from one of the types of cerebral hemorrhage.
3. Papilledema develops within 12 to 24 h in cases of brain trauma and hemorrhage. 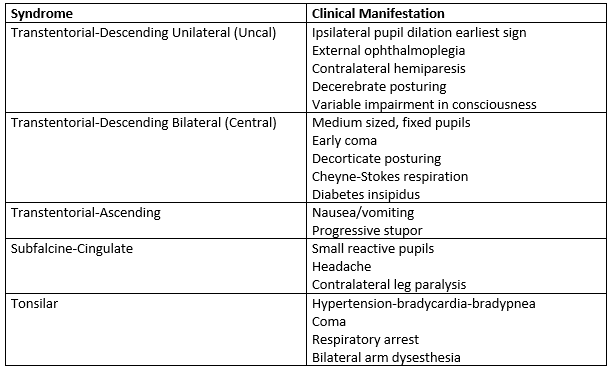